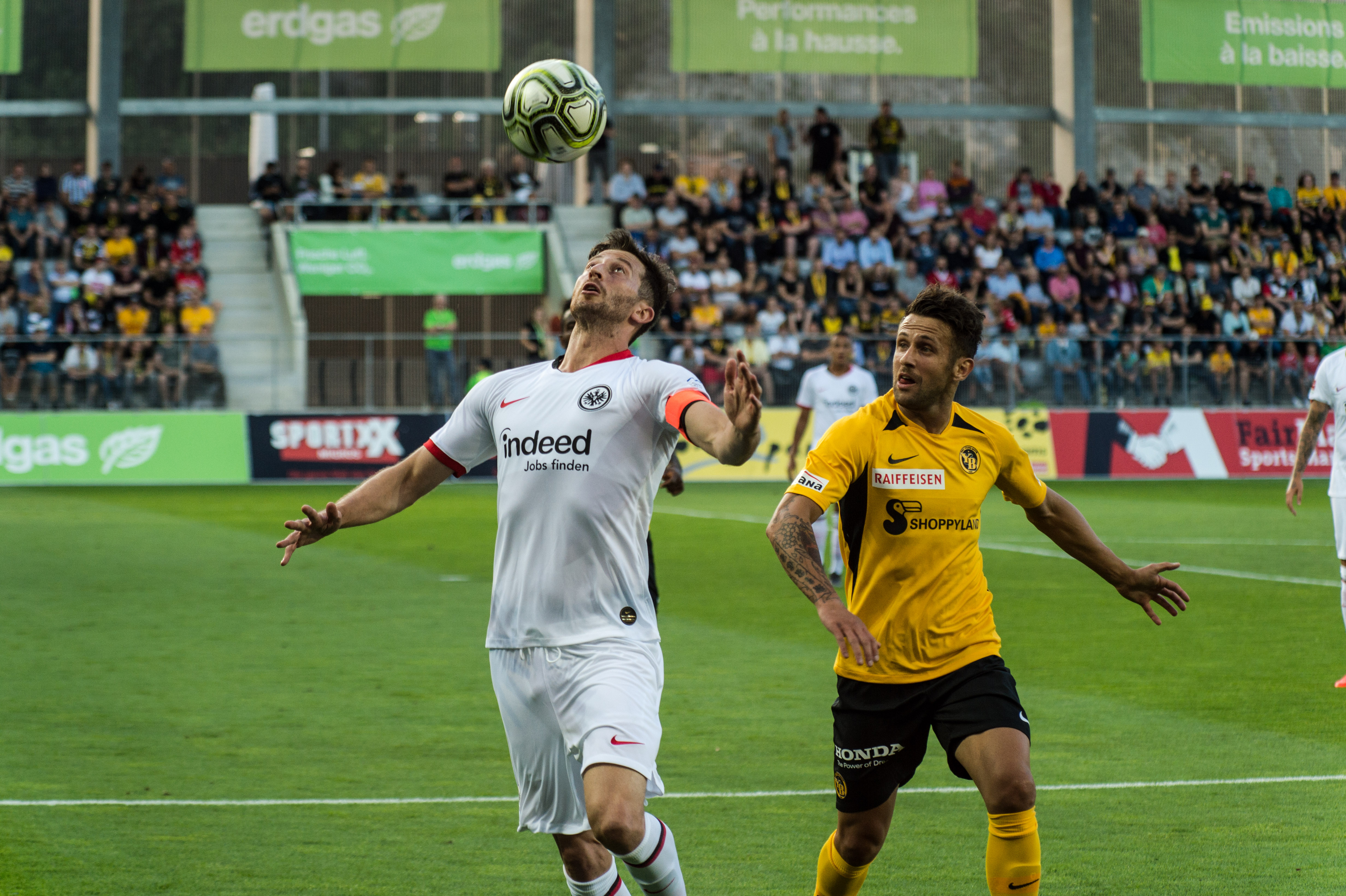 By then the damage was done, and it was a disappointing return on the pitch for Adi Hütter whose Eintracht side’s lack of match sharpness was fully exploited by the Swiss. This was to be expected, with Young Boys’ domestic season starting next weekend and Eintracht still fresh into their pre-season.

Before the game, Hütter received the warmest of receptions, and was even presented with a celebratory cake prior to today’s match in Biel/Bienne.

But any sentiment was put to one side the minute the game got underway. Young Boys were expected to be the sharper of the two teams and they caught their opponents cold after just six minutes. Following a quick break from the Bernese, Ngameleu’s ball in was swept home by Young Boys’ leading marksman Guillaume Hoarau, the Frenchman who has developed a real knack for scoring at this competition.

Seeking to muster a response, Eintracht’s Mijat Gacinovic sought to test Young Boys’ keeper David von Ballmoos from range, but the Bernese custodian was equal to the effort. Eintracht would be left incensed by the referee very soon after, however, as winger Ante Rebic took a tumble in the box only to see his appeals for a penalty waved away.

It went from bad to worse then for Eintracht as Provider turned goalscorer on the half-hour mark for Young Boys to double their lead. From a direct free-kick, Ngameleu fired a low strike from distance that deceived the Eintracht wall and goalkeeper Frederick Rönnow, sneaking in the bottom corner for 2-0.

It could have been more for the Swiss before the break as the second goal saw them seize control of the game. Hoarau successfully met a Miralem Sulejmani corner but could only guide his effort over the bar. The Frenchman then did then have the ball in the bet on 40 minutes, only for the offside flag to cut the celebrations short.

Von Ballmoos almost gifted Eintracht a goal back right before the break, getting into a spot of bother with Gonçalo Pacienca, but the Portuguese could only hit the side netting to waste a glorious opportunity for the visitors.

Eintracht’s luck didn’t get any better in the second-half, and Young Boys made the game safe on 68 minutes, Cameroonian attacker Jean-Pierre Nsame finishing low into the corner past Rönnow and getting his name on the scoresheet.

The evening went from bad to worse for last season’s Europa League semi-finalists from that point. Young Boys were awarded a penalty which substitute Gianluca Gaudino slotted home on 77 minutes before his fellow substitute Esteban Petignat helped himself to a goal on 81 minutes. From a reasonable position at the break, the Swiss had turned it into a rout.

Eintracht substitute Dejan Joveljic then salvaged some pride with a consolation goal for the Bundesliga outfit four minutes from time, but by then it was too little too late.

As frustrated as Young Boys boss Seoane may be that his side couldn’t keep a clean sheet, he will undoubtedly be pleased with a good all-round performance which sends out a resounding statement ahead of what is now Saturday’s Uhrencup decider against Crystal Palace in Bern. The winner of that game will go on to lift the trophy.

Meanwhile, Hütter will have a whole list of improvements for his side to work on throughout their pre-season, starting with Friday’s showdown against FC Luzern back at Tissot Arena.